In this tutorial, you will learn-

What is Real Testing Device?

Testing on real device allows you to run your mobile applications and checks its functionality. Real device Testing assures you that your application will work smoothly in customer handsets.

Emulator is a software program that allows your mobile to imitate the features of another computer or mobile software you want them to imitate by installing them to your computer or Mobile. 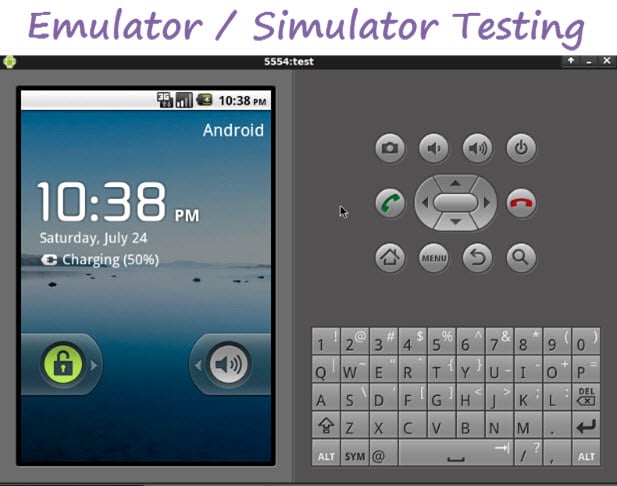 Difference between the Emulator and Simulator based Testing

Advantages of Real Device and Emulator/Simulator based testing

Disadvantages of Emulator/Simulators and Real device

Considering the significant role the mobile applications plays, nowadays, in our day to day life, testing of these applications are going to evolve and thus they require a lot of testing to make them work as required.Testing in both the simulator/emulator as well as the real world devices is necessary to maintain strong standards and quality assurance.

Careful deliberation of both the pros and cons of mobile emulators and real devices, it would be worthwhile to reach at the conclusion that the optimal mobile testing solution for enterprises is neither putting all the eggs into the basket of the real devices nor putting them into the emulator but rather what we need is an optimum combination of both.

Emulators can be considered as very suitable for the initial stages of application development.

However, to avoid the costly scenario of releasing a business-critical application with defects, enterprises need to ensure that they perform the major part of their mobile testing on real devices before the application goes into production.

Each organization needs to strategize and plan carefully to determine at what stage to introduce real devices, they also need to decide how many devices are sufficient to cover market needs, and what could be the best possible option to adopt for managing those devices.

Best practices would indicate that actual development should use emulators (and a few reference real handsets) in order to speed up the debugging of the application during the coding phase, while sanity, Smoke Testing, performance, interoperability and network feasibility and Regression Testing should be done on real handsets.

It is also an emerging practice to ensure that the developers use the emulator for fast execution during the development phase whereas then the testing team should test with the real device during the testing phase in order to ensure overall Quality Assurance goals and targets.To save on cost, they can consider using Virtual Mobile Testing tools. These services offer developer to test their application on wide variety of handsets using different mobile networks geographically located throughout the world (useful for applications using GPS). Such services are offered on hourly basis and are very cost effective compared to buying new phones.